Once our family had decided our next summer adventure would take place in Washington D.C. I knew exactly what I wanted to see first. The White House is a spectacular tour. The Smithsonian Museums rival any museum in the world. It would be easy to fill a whole week with historic sites and sounds, but then you would miss out on one of Washington D.C.’s true gems, Astro Doughnuts & Fried Chicken.

As we made a list of DC attractions to visit, I secretly kept a close eye on any place that put us within walking distance of Astro. It turned out that if we could land a tour of The White House, we would be minutes from delicious doughnuts (not that I’m not willing to go out of the way for doughnuts). I put in our request through our Congressman Jim Renacci’s office for a White House tour and waited.

Not only did we land a White House tour. We landed a morning time slot, which worked perfectly for getting doughnuts before they sold out. I have no idea if Astro sells out, but I am guessing they do because…doughnuts.

After our tour, we walked a couple blocks and almost walked right past my beloved doughnut shop. It’s not that big and we were caught up in looking around at all the DC eye candy. We caught ourselves in time, though, and made our way inside.

Astro Doughnuts & Fried Chicken have a few locations including DC, Falls Church, Virginia, and Los Angeles. They also operate a food truck in both DC and LA. Astro offers online ordering, which is a great service for locals.

Can we just pause for a second and acknowledge the genius of Astro Doughnuts & Fried Chicken for combining two of the greatest comfort foods ever created? Seriously, I can’t think of a better food combination personally. If you can, well, you’re wrong.

The DC shop is tiny. Like super tiny. At least the storefront is tiny. You can’t fit more than a few customers in at a time. We are a family of six so we filled up the shop ourselves. Nothing wrong with that. Although Astro’s menu isn’t too extensive, I found myself overwhelmed by the sheer awesomeness of what I was about to experience. It’s tough to decide which doughnut to get, especially at artisanal doughnut shops like this where prices are a little higher than your local doughnut shop.

The family quickly made their choices, which included vanilla, happy birthday chocolate cake, and maple bacon. Our youngest daughter continued her trend of being insane and not liking doughnuts. Her loss. I set my sights on the Creme Brulee. At this point I had completely forgotten about fried chicken (is that even possible?), but Barb ordered a fried chicken sandwich we could share. I really should have ordered some wings or a drumstick or something. I dropped the ball.

Let me tell you something. Astro Doughnuts & Fried Chicken’s Creme Brulee doughnut is no joke. Absolutely astounding! I can remember the taste even as I type this review. It was that good. The top of the doughnut was perfectly caramelized to give it that extra bite that pairs perfectly with the decadent vanilla custard inside. Since our kids were allowed to use electronic devices as we took our snack break outside the shop, all they could muster were nods of approval when asked about their doughnuts. The audacity of interrupting Fortnite with family conversations! I’m sure I wasn’t capturing doughnut close-ups for Instagram or anything like that. Normally I love to have coffee with doughnuts, but Astro had Coca-Cola in glass bottles.

After finishing I realized nobody had a PB & J doughnut, one of the specific reasons I had for visiting in the first place. I went back in and purchased one and split it with the wife. It tasted like…a peanut butter and jelly sandwich but in doughnut form. What makes this doughnut different from most (not all) is that it was square with a hole in the middle, yet the jelly filling was piped through each side, leaving you with jelly in each bite. Impressive. I’m guessing they use a similar piping method as Doughnut Plant in NYC, but that’s just a guess.

Astro’s chicken sandwich was delicious as well. Plus it makes you feel healthier if you pair chicken with a doughnut. At least I will tell myself that. Next time I will opt for some straight up fried chicken, though.

Our adventure at Astro Doughnuts & Fried Chicken puts them towards the top of my doughnut shop list, although I’ve never really ranked them. The process would probably be more difficult than picking a favorite child. Astro’s staff were super friendly, the shop had a great vibe, and the doughnuts were otherworldly. No trip to Washington D.C. would be complete without a stop at this little doughnut shop.

Do you know of a doughnut shop we should check out and review? Let us know in the comments below! 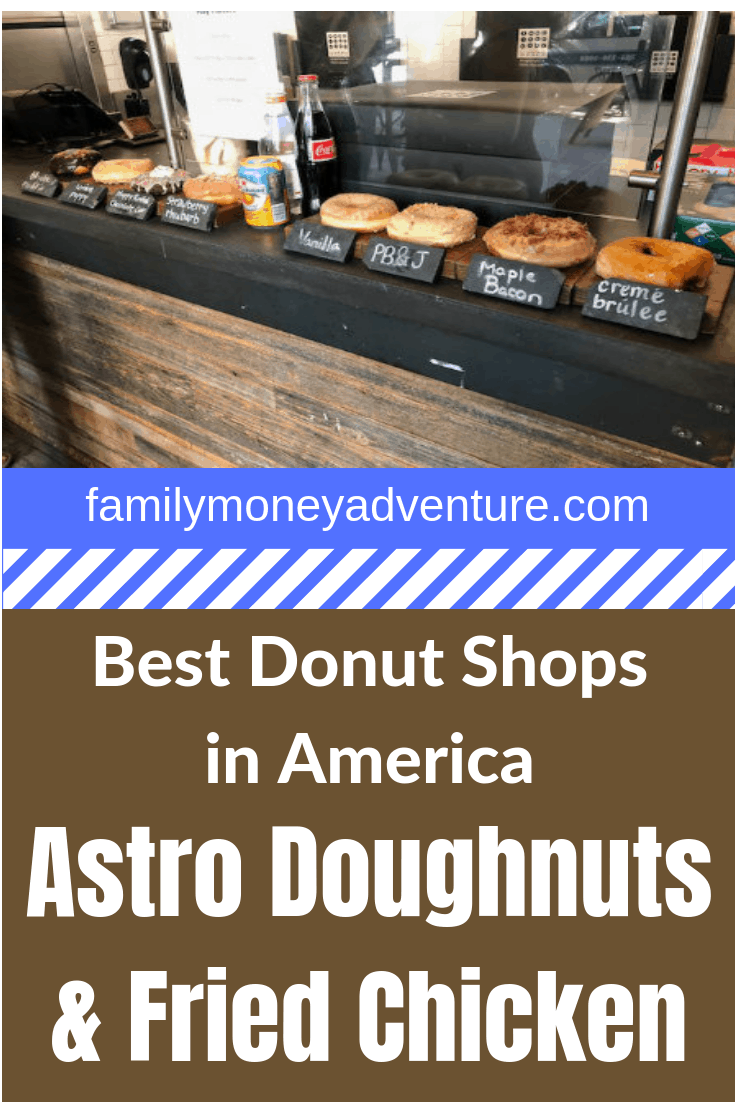